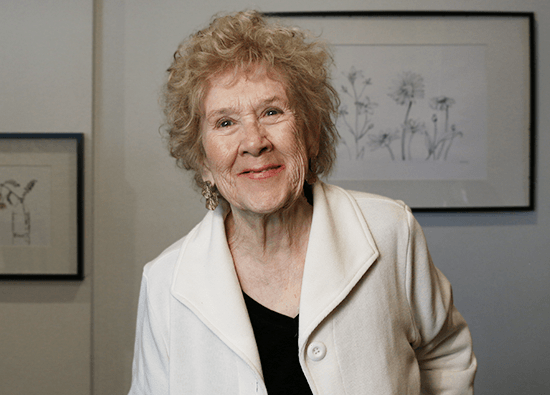 A Unique Career That Saved Thousands of Lives

I viewed Peggy Albrecht as my first client, long before the launch of Inspired Work. When we met, Peggy had what many would characterize as a “great job” working for a big company in downtown Los Angeles. She had this kind of civility and dignity that elevated her into one of my role models. In all the years that I knew her, she never said one word against someone, ever. In my 20’s, I was running a temporary help service in Los Angeles. One afternoon, she called and asked if I would join her for dinner. She wanted advice about her work. I would have derived great value from listening to what I told her.

That night, she told me that her work was good enough. But, in her own spiritual development, she had realized the work had little meaning. She went onto describe how the absence of meaning was becoming more painful every day. I asked her, “What do you enjoy doing more than anything else?” She took a long pause, looked me in the eye and said, “I most loving helping women get sober.”

“I don’t know exactly. But, you told me what you want to do with such conviction and clarity that I know that is what you are meant to do.”

We chatted regularly about her progress. One day, Peggy called with exciting news. She had just accepted a position managing a sober living facility called Friendly House. Bea Jorgensen co-founded the house in the early 50’s and it had become a well-known refuge for women who had fallen on desperate times. Bea’s story was portrayed by Carol Burnett in a movie called, “Life of the Party.”

I smiled and said, “Go do that.” Candidly, I didn’t have enough expertise to say much more and in hindsight, it was intuition, God, a higher power that came through with those three simple words. But, she called me not long after to say she had found a job with a sober living facility called Friendly House. From that day forward, every time that I saw her, whether it was a week, a month or a couple of years, Peggy was happier and more at peace with the world. She had a progressive head-to-toe transformation that only grew with time.

A few years ago, I had lunch with my ex-boss. Gail had built a hugely successful staffing company. She sold that company and proceeded to become a celebrated artist with installations at some of the world’s leading galleries. We had not seen each other since 1990. The moment she sat down, her first words were,

“What is it like for you to wake up in the morning?”

I asked what she meant so she pushed a little, “Because of the work that you opted to do, thousands of people have different careers and lives. So, what does it feel like to wake up in the morning?”

I opened my mouth and instead of words, tears started falling. I thought of Peggy.

“The first person I ever supported with a career choice leads a recovery facility that has literally saved thousands of women’s lives. I had no idea what Inspired Work would generate. Our graduates change the world. Some run successful businesses. Others have become leaders in organizations in virtually every field. It is a blessing to wake up and to have the privilege have yet another day to serve people like this.”

We went on to discuss the importance of establishing meaning in our lives and how elusive that outlook is to so many people who work. Of course it takes courage to break out. Candidly, I believe it ought to be more frightening to stick our lives in a box afraid to emerge with all that our DNA wants to achieve.

Years ago, a friend named Alan told me of his aunt Esther. Alan was her favorite nephew. One day, he received a call. After years of declining health, Esther was about to pass away. A family member told him that Esther had something of vital importance she hoped to tell him. So, Alan jumped on a plane and flew south. He walked into her home in Laguna Beach, stepped into her bedroom and gave her a hug. She whispered in his ear, “It’s all bullshit.”

I usually live in a world somewhere between Peggy Albrecht and Aunt Esther. We often take our situations so seriously, that we miss some of the most important opportunities of life. But, in essence, Peggy and Esther had a few striking similarities. Both lived their lives without reserve. Except, Peggy had a good sense of what wasn’t important and razor-sharp clarity about her mission, vision, and purpose in life.

Peggy Albrecht built the Friendly House into one of the nation’s models in how to develop a thoroughly successful recovery organization. Countless individuals were influenced by her gratitude and joy in helping others. Celebrities raised money, community leaders praised her. But, she was at her very best when a woman would be admitted to the house, shaking from head-to-toe, thinking her life was over. That was the moment when anyone in the room could look at Peggy and see God flow through her. Often, Peggy’s first words would be, “Let us love you until you can love yourself.”

Recently, I was leading an Inspired Work Program in Los Angeles. During a break, I got an e-mail that Peggy had passed away in her sleep. We were at a point in the program where many of the participants were in the midst of giving birth so adding a few minutes to step outside and grieve wasn’t in the cards.

When the program began, I opened with the words,

“I want to tell you about Peggy Albrecht.”