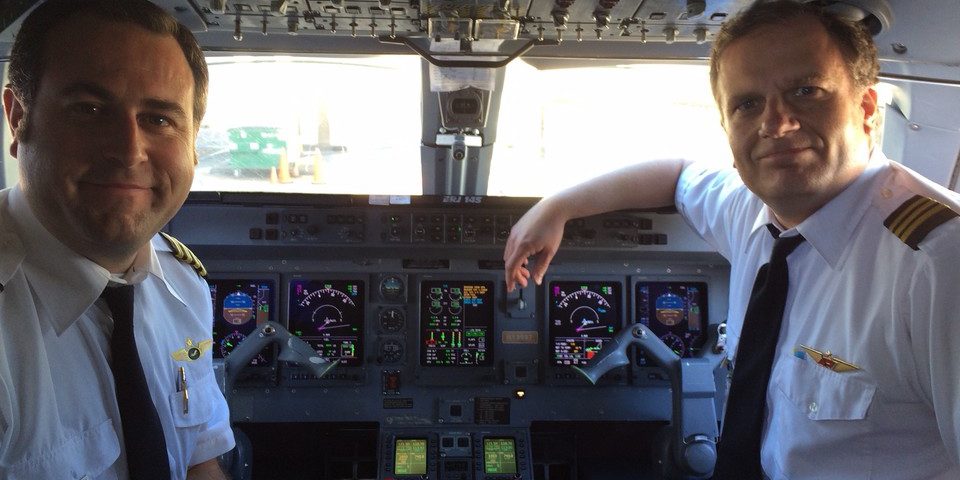 How One United Airlines Pilot Launched an Entirely New Career

Six years ago, I went out on a first date kind of place called Le Petit Four. It is in an especially “tony” area in Los Angeles referred to as Sunset Plaza. Open area restaurants nuzzle up against world famous boutiques and paparazzi chase after their targets. Paul was dashing, handsome, and intelligent. The more that we connected, the more apparent it became that he had an extraordinary heart and integrity. This past spring, we celebrated our 6th anniversary in Santorini.

When we met, Paul was a commercial pilot with United Airlines. By his early 40’s, he was already a second career. Early on, he had become a tech executive and accumulated quite a bit of success developing digital platforms and setting up enterprise software. But, he hated feeling tethered to a desk and had a DNA pull towards travel. So, Paul left and put himself through flight school, became an instructor and got hired by Express Jet, just as it was becoming a division of United. Early on, it was a terrific place to work but all of that quickly changed when Jeff Smisek became the new CEO after the Continental and United merger.

Smisek took one of the better cultures in the industry and turned it on its head through surreal cost-cutting and outright hostility towards the benefits that cause so many people to work for the industry. Benefits, pensions, travel packages were axed without explanation. Bean counting led to planes having to make emergency landings for toilet paper. Customer satisfaction scores sank to the lowest in the industry.

I would watch Paul get up at 3 in the morning, put on his uniform and walk out the door of our home in Los Angeles to commute to Chicago, which was his hub. Over that last year, his body language plummeted. Throughout the system, morale was declining to the point that everyone responsible for supporting the pilots and employees lost interest and became disengaged. A great deal of media coverage has been given to United’s handling of pets and passengers. But, there was one moment where he told me of sitting in a jet during a snowstorm in Chicago. A United plane next to his that was unloading passengers. A gentleman missing two legs was trying to get across the icy tarmac apparently trying to make another flight. Paul saw him struggling and called operations to tell of the unfolding crisis. The first time, no one answered. When he reached someone, the employee could have cared less. When I saw the anguish on Paul’s face, I knew that he had to leave.

Not long after, an Inspired Work Program was scheduled for the weekend and I knew he was going to be home. While I have unabashed confidence about the program, inviting him to participate opened the door to waves of anxiety. But after he walked in that door, he made a series of decisions that changed both of our lives. So many of our participants make revolutionary changes in their lives but they characterize it as “common sense.” That is the nature of finding one’s truth.

He committed to re-enter the tech industry as a business owner. He had worked in an organization that pushed back on his natural creativity. What would happen if he took full ownership of his vision? But, how would he come up to speed with technological change in a field where 8 years might as well be a century?

Immediately after the program, computers and equipment arrived at our home. Ever day, he was buying and downloading training manuals. Later, his clients would ask, “Where did you learn to do this?” To which he responded, “Online.” Three and a half years ago, Paul Archambault did his last flight for United Airlines. All of this happened at the very time that I turned Inspired Work into a virtual workplace. We moved to the beach. Most of my consultants also live at the beach. Why would we want to drive if we can see each other on the computer?

I have watched Paul progress from being a novice to having a world-class business that serves a wide variety of organizations, highly visible professionals and small business owners. He progressed from designing simple websites to creating award-winning digital platforms.

Not long ago, I pulled together a group of advisors to take what the world has know as “Inspired Work” and move it onto a digital platform with a radical new business plan. One of my advisors is Kim Shepherd, who was the CEO of Decision Toolbox and one of the most respect digital executives in California. When I asked her what we needed to launch she responded, “You have all that you need right now. You have Paul.” I asked of her perceptions of Paul and she smiled, “He is the single most effective active learner that I know. I have watched Paul progress from being a novice to an artist and I know he will find whatever is necessary to make the business a huge success.”

How did he get here?

First, he designed the life he wanted to have. He based his new career on meaning, purpose and taking what he loves into a creative new business. Instead of dismissing his experience from past careers, he picked and choosed what he loved. Above all, his natural curiosity and quest for learning game the means to reinvent quickly and without much drama.

As many of my readers are aware, I’ve been sharing stories about unique careers and how every day people are elevating and customizing their work into more than a living, they are making new lives.

This particular story simply hits close to home. But, Paul’s story speaks to a future where today’s college graduates will change careers, not jobs, four to six times. If you would like to see some of his work visit http://www.successmediaservices.com

Over the past few weeks, I have and will continue to share stories about individuals who made dramatic career changes successfully. All of them have a few common traits. They identified the move that represented what would make them happy. They learned the life skills to be successful. They practiced courage and took action.