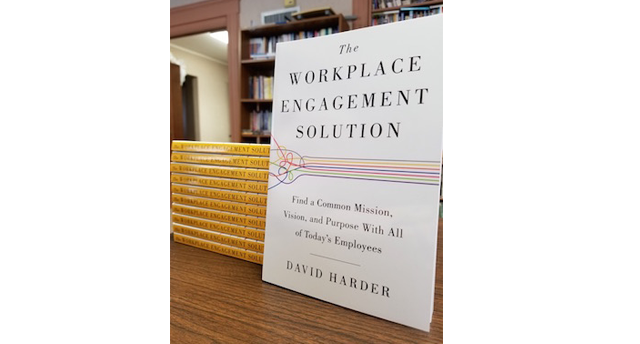 The only true shortcut to success is in recognizing there are no shortcuts to success.

David Harder’s new book, The Workplace Engagement Solution, points out how disengagement often begins when we attempt shortcuts in how we build our talent. Instead of developing a robust employer brand, some organizations hire for expedience. Many spend loads of money locating talent only to turn them over to hiring managers that have never been trained to conduct an effective interview.

CEOs in category leading organizations increase the probability of success by examining and “owning” every aspect of their culture. This past year, David interviewed Adam Miller, CEO, and Founder of Cornerstone on Demand, the fast-rising tech giant that helps many of the world’s largest companies recruit, train, and manage their people. More than 27 million users in 191 countries and in 42 languages engage with its software and services. Over a 12-year-period their employees have retained 95% of the company’s customers. David Harder finds Adam Miller is a case study in how talent and culture is a fundamental pillar of success. In other words, when facing explosive growth, Adam took no shortcuts:

“When we had 30 people, we knew we had a culture but it hadn’t been defined. There was a turning point when we had 50 and would triple that number by the year-end. New people would outweigh us 2 to 1. We formalized the culture. That began with the kind of people who work here who are smart, cool, dependable, and visionary. We believe in teamwork and client success.”

You were directly involved in all of the early hires.

Yes. I hired the first 250 people. I personally hired all of them. After 250, it became impossible. My job became entirely interviewing.

I stopped hiring the individual contributors and hired the managers…we have over 2,000 employees, so it just isn’t feasible to continue hiring employees. I do the final interview for people that are critical for representing the company in certain ways.

How do you hire people that are going to protect your culture DNA?

Early on, I hired the managers. I selected the ones that would hire others. I loosened up when they proved themselves. For a while, I was the last interview. By the time they got to me, they were already meeting performance and technical requirements. But, I rejected quite a few candidates, almost always on culture fit. Periodically fights brewed about that because it was so hard to find someone. But that persistence built the standards.

Adam Miller developed and grew a clear vision, mission, and purpose for talent by taking no shortcuts. At a certain point, he had to pass that vision on to others with laser-like clarity. This is one of the key reasons Cornerstone on Demand is a success story and also happens to be a place people love to work.

What is our takeaway? It is difficult for a CEO to articulate an employer brand without getting one’s hands a bit dirty with being an employer. Hands-on interviewing, visiting the front lines, talking to workers, observing how the talent engages with customers, are all aspects of what it takes to lead an engaged organization. Adam Miller’s direct experience of the talent acquisition process has led to a strong employer brand as well as treating candidates like customers – all contributors to terrific word-of-mouth. Compare that to the norm.

Is there a norm?