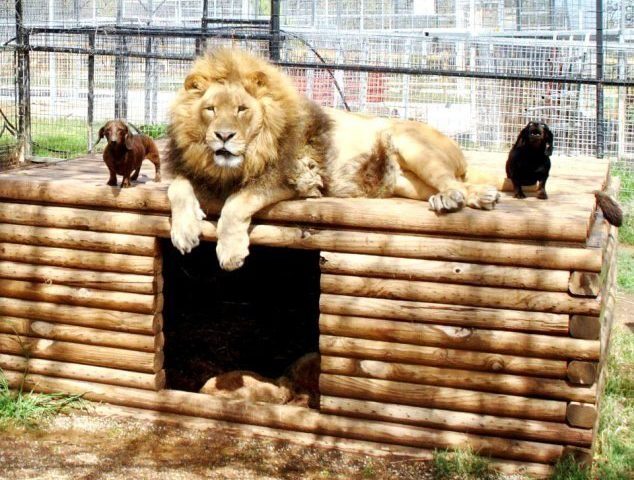 Overcome Fear? How About Practicing Courage?

The dogs in this picture grew up around a lion who had been rescued when his mother was killed. One of the dachshunds squeezed into the lion’s pen. Three others followed. The lion and the dogs became inseparable. As a result of practicing some type of courage, they realized a gift that changed their lives.

We live in a culture where comfort is progressively given greater value than pursuing and realizing the lives we were meant to have. When we make comfort more important than action, the outcome will be mediocrity.

In a culture fixated on security, we have reinforced the myth that there is something fundamentally inadequate about us when we feel fear. If this is the case, we construct our lives around avoiding fear and as a result, the real and best opportunities don’t even reach our field of vision. Because the purpose of fear is to take action.

For example, the notion of “fight or flight” disappears as we cross a street and a large truck roars around the corner. Heading directly towards us, our biology takes over. An alarm goes off that pours powerful hormones and chemicals into our body. This system is perfectly designed for taking us into action. Why does our culture need to make up so many strange stories and myths about basic biology? My personal belief is the mythology developed around fear is to manipulate others.

We can find this strangeness embedded in one of our country’s most famous quotes of all time when Franklin D. Roosevelt said, “The only thing we have to fear is fear itself.” We sent over seventeen million Americans into World War II. I have yet to find any of those soldier’s stories repeating the president’s missive. Instead, we find countless narratives where those on the frontlines characterized the experience as the single most terrifying event in their lives. However, every war hero used courage, that resolves to take the necessary action despite our fear.

How does this apply to our current circumstances?

Right now, we have dozens of clients that are changing their lives by launching new careers, new businesses or returning to the work they have with new behavior. In other words, they are changing themselves. The ability and the resolve to change oneself is critical to getting the most out of the modern workplace. The most successful professionals now change so quickly they are in a state of becoming. They thrive because they bring fear along for the ride and respond to fear with courage. And, they are not wasting time trying to become fearless.

Perhaps a healthier alternative statement would be, “The only thing have we to fear is to forget the practice of courage.” True courage isn’t about walking into difficult situations as a robot devoid of feelings. As the famous male icon of that era, the brutish John Wayne once said,

Truly successful people are quite accustomed to the experience of fear. When we listen to high performers as they describe their breakthroughs, fear is invariably woven into the narrative. After Ellen DeGeneres got her first TV show, a journalist asked how she felt about it. She responded, “This elevates my terror to a whole new level.” Ellen didn’t allow fear to keep her from her destiny. In the same theme, as Richard Branson’s numerous businesses began to grow, he had to confront his greatest fear, which is to make presentations. Recently, he said, “There are two types of public speakers, terrified ones or liars.”

Demonizing fear has sprouted an entire human potential industry that promises if we take a course or buy a particular book, we will overcome the very behavioral asset that keeps us alive and thrive.

What will happen when all of us learn to develop what I characterize as the “courage skills?” These include learning how to draw attention to ourselves, how to present one’s ideas, and how to build an effective customized support system.

In fact, if we have allowed our fears to keep us from right action, the fear of what could exist behind the curtain of the “unknown,” consider that it isn’t a boogie man,

It is the life we are meant to have.