“I think fearless is having fears but jumping anyway.”

“Courage is getting up on that horse even when you are scared witless.”

I know the “self-help” industry promotes the notion of fearlessness.

The pursuit of fearlessness, in truth, is an enormous waste of time. In our endless search for comfort, the casualty is action.

My viewpoint of fear changed when I Bob Maurer. He has played a variety of leadership roles in the Behavioral Science Department at UCLA Medical School. More simply, he has devoted most of his professional life researching and communicating the behavior of successful people. Some would think he studies the rich and famous. He learns from people who are successful in every meaningful area of their lives. That means the subjects are happy about their family, love, money, careers, physical and emotional health.

He tells us, “Successful people are used to the experience of fear and when frightened, reach out to another person for comfort.”

Just to be clear, Bob isn’t suggesting that “reaching out” includes taking our friend’s box of candy. For parents and anyone close to children, what happens when they get frightened? For what? Comfort! And when they stop crying, do they want to cling to us until the end of the year? Sometimes I do. But usually, the moment their alarm shuts down, they move on with their lives.

That is until the magic switch turns on. We cry, and an adult turned to tell us, “Shut up, or I’ll give you something to cry about.” Or the watered-down version, “You a big boy now. “Stop crying. That’s for little shameful sissy boys.” Or under the breath, “We’re on a plane, and if you don’t stop, I’m going to have to send you outside.”

Our biology shuts down when we get comfort from another. But when we did stuff it, we moved on to the many ways adults seek comfort.

We lie, become mean-spirited, quit what we’re doing, order a no-contact delivery of two dozen special items from Princess Donut. Some of us drink, watch Oprah, leave town, or run away, smoke, over-exercise, and chase people on the LA freeways.

This is the adult way.

Or we can choose the self-help way.

Human development’s made breathtaking fortunes offering fearless lives. But first, we will have to demonize fear itself. You know, read this book and you will be fearless and pursue the life you really want without the sweat. Try hitting the freeways of Los Angeles without fear, and you will quickly take out your two front low-profile tires on your brand-new BMW. Or, that 50-pound woman in the 6,000-pound sport utility to the right, you can only see the top of her head, but she is texting and swerving into your lane. She’ll crush you as the Queen Mary did to that warship in the middle of World War II. Except she won’t notice because the dim bulb is still texting.

And now, the truth.

The grandfather of human development was Napoleon Hill. For years in the early 20th century, Mr. Hill was a con artist moving from one town to the next selling land deals, fake stock, and more. He did have a highly developed sense of intuition. Time and time and time again he skipped town just as law enforcement was on the way to get him.

His fortunes turned with his first bestseller, “Think and Grow Rich.” Sounds good to me. In it, Napoleon managed to get Andrew Carnegie, one of the world’s richest men, to share his “secrets” to success. By the way, when you read a cover with “secrets,” a bit more research could be a good idea. Secrets and fearlessness are the two most common themes in self-help markets. I argued with my first publisher about the category of self-help asking they start a new one called, “Get Help.” He was the first person in media to suggest a life without fear. Once again, why did he skip town?

The next big human development leader began adulthood with the name Jack Rosenberg. Loving anyone for their potential is cruel. Jack tortured himself over that one. By day, he was a used car salesman in San Francisco. By night, a husband and father on the other side of the bay. Despondent, Jack enrolled in Scientology. He was pouring money into the volumes of auditing to make himself “clear.”

He describes the morning when, he “got it.” He was crossing the Golden Gate Bridge to work when it all came together. When he was back on land, his life had changed. He took the essence of Scientology auditing, turned it into a group program, changed his name to Werner Erhard, abandoned his family, and launched EST.

A friend enrolled me in it. I sat in the chairs for 18 hours, listened to hours of cursing, watched everyone’s reaction and I lost my fearlessness because I was too exhausted to feel my hands.

Today, Werner Erhard lives in Switzerland, the one country that outlaws the practice of Scientology.

Don’t wait to be fearless before pursuing the life that you want.

Perhaps the deepest lesson is that even the most imperfect people in the world can contribute to positive change.

Look towards action as being the primary way we succeed. It doesn’t matter whether you are frightened or calm during the journey.

As per my observations, the more we want something, the greater probability we will get frightened.

It is normal. Successful people know this.

Cher has always had a personal stage manager with the temperament to deliver on the biggest responsibility. Cher has had crippling stage fright her entire life. Sonny Bono was the one that dragged her out in front of us. When they broke up, Cher hired someone else to take the responsibility. She cursed, swore, threatened, claim she was sick, cried, and told one of them she would never work again. But, once they pushed her out that door where she turned into, Cher!

Without that intervention, she would probably be Cherilyn Sarkasian, the crazy manicurist at the strip mall. 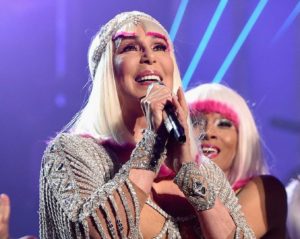 Imagine arriving at the pearly gates only to declare,

“That wasn’t so special.”